It was the summer of 2010 and the small town of Rock Creek was suffering through a heat wave, the likes of which had not been seen in 50 years. The oppressive temperatures bred exhaustion and short tempers throughout the town. This summer however, there was a much greater cause for concern – There was a serial murderer on the loose.

Anna was 6 at the time and her anxiety level was way more than any child should have to bear. For her fear of this killer haunted her days and kept her from sleep. Even the dull humming of the fan in her room could not calm the thoughts running through her brain…As this killer was special and his crimes were of a horrific nature…all of his victims had been beheaded. In addition to the heinous nature of these acts, the heads of the now 7 victims had not been recovered.

Every case was the same. The murders took place inside the victims’ home. No blood at the scene. No note. No weapon. It was a mystery that seemed unsolvable. It had gotten to the point where Anna no longer wanted to leave her room. Her older brother Jack had tried, unsuccessfully, to console her. His constant visits to her room however, just seemed to make her more uneasy.

As the days and weeks passed, Anna’s mother also became concerned. There was something odd about Jack’s behavior. He became more withdrawn and the times she and Anna would go into town, Jack had insisted on staying home. It became obvious that Anna’s brother knew things he was unable, or unwilling, to share.

One morning Anna’s mother was startled awake by the screams of her daughter coming from the hall, She ran out of her room to see her daughter standing in the doorway of Jack’s bedroom. There had been another beheading, Anna wailed. Beyond her small frame, her mother peered past Anna into Jack’s room and saw him sitting curled up on the floor, head in his hands. When she entered the room, without looking up, he pointed towards his bed. As his mother got down on her knees and lifted the edge of his comforter, she could see thin wisps of blond hair stuck in the floorboards beneath the bed. Lowering her head to floor level her eyes were met with a vision that no mother wants to imagine. Jack’s obsession had been revealed. The murderous rampage was his alone. He would pay for his crimes and his parents would be the ones to determine the consequences of his actions…which tuned out to be no video games or tv for a week. Anna and her friends would find peace in the punishment and would once again sleep soundly, knowing that justice has been served. 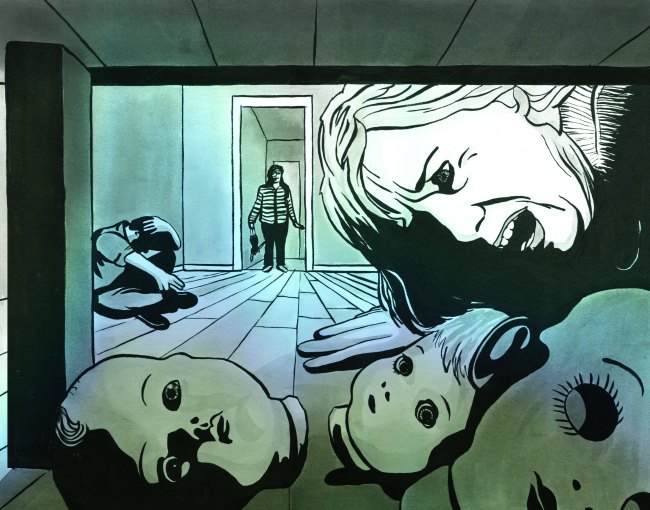